GOD HOW I ENVY THE DEAF IS OUT TODAY!

Were you counting down until midnight? We certainly were, as our long awaited new album God How I Envy The Deaf is now finally unleashed on the world, as it is now October 18th! Yes!
If you’re wondering about what the critical class has had to say, well ladies and gents there’s press galore! The first single “Fancy English” was dropped over at The Obelisk, the second single “Filth Castle” was premiered over at Heavy Blog Is Heavy, and the third single “Boxed and Crated” was deposited over at Doomed and Stoned. The full stream of the record was finally unveiled Wednesday at Metalsucks.net.
There are a couple full album reviews out HERE and HERE and the kind folks at Heavy Blog Is Heavy also indulged us with an article about 4 albums that influenced our contributions to CC. Wow!

At midnight October 18th, the whole record should be available on Bandcamp, Spotify, Itunes and wherever else you digitally consume music.

You can purchase God How I Envy The Deaf HERE – there are two vinyl options available plus CD and digital!

For those of you in the DC area, our album release show is Saturday, October 19th at Atlas Brew Works in DC with The Mantis and Pimmit Hills! Show starts at 8 pm sharp, be there! FACEBOOK EVENT HERE!

Our New Full Length ‘God How I Envy The Deaf’ Will Be Released October 18th via Magnetic Eye Records!

Hey CC Nation! We’re back from our summer tour and gearing up for the release of our newest full length record ‘God How I Envy The Deaf’, our first release through Magnetic Eye Records! Our tour was a smashing success and we have a fall tour announcement coming soon! But first, feast your eyes upon the cover artwork (by Jase Harper) for the new record, and then peep these important upcoming dates / pre-order link for the ‘ole CC. 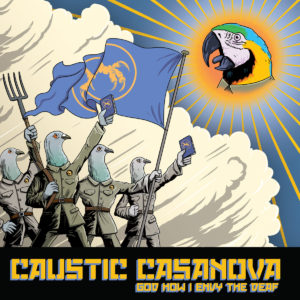 Friday, October 18 – ‘God How I Envy The Deaf’ Release Day! YOU CAN PREORDER THE RECORD HERE!

Saturday, October 19th – ‘God How I Envy The Deaf’ Release Show at Atlas Brew Works in DC with Pimmit Hills and The Mantis! This will be a four piece show!

Saturday, November 2nd – ‘Day of Doom’ Magnetic Eye Records Showcase at Saint Vitus in New York! This will be a four piece show!

You can stream our first single via its world premier on Heavy Blog Is Heavy HERE!

**November 7th we head out for God How I Envy This Tour. Announcement coming soon**

With Andrew making the move to Schenectady, NY (thanks to all who came to The Pinch in DC on Saturday the 26th for a glorious send-off) as a newly engaged man, he’s taking a little time off and not going on this tour. Well, we’ve got our second guitarist Jake Kimberley ready to go and we’re going to be bringing you the rock quite literally like never before. The Francis-Stefanie-Jake trio lineup will have its first ever show Wednesday in Chapel Hill, and we’re excited to debut new, never before heard material, as well cuts off our forthcoming record.

Speaking of which, our new album will be out on Magnetic Eye Records October 19th – details soon!

Hope to see you all at the shows! Please check our facebook page and our shows page on our website for all the most frequently updated information on lineups, tickets, etc.

Hello friends, it’s been a while since we rapped at ya!

Our shows in Baltimore (both of em!), Columbus, Canton and DC over the past few months went extraordinarily swimmingly, and we’ve got more great stuff on the way! July 20th in Frederick at Cafe 611 for Franfest XXXV, and July 26th in DC at The Pinch! Followed by a massive tour starting August 7th in Chapel Hill, North Carolina! Also, Andrew got engaged to longtime girlfriend Colleen Connelly! Wow!

We will announce our new album and preorders for that soon. In the meantime feast your eyes on our tour poster, and keep checking our Shows section for all the most current information. Also please keep up with us on facebook and instagram where we are updating you all daily with news about the tour, album and so much more! 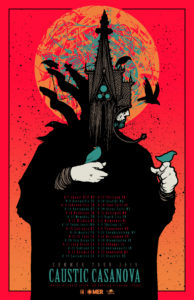 Ch-Ch-Ch-Changes! Plus 25% off everything!

If you’ve been following us on social media, you know the news – we have a fourth member, second guitarist extraordinaire Jake Kimberley, formerly of Morning Banana Diet and currently of Flooded. We’re extremely excited to have him in the band – we’re writing new stuff that wouldn’t have been possible without him, and we’re re-imagining old songs too. It’s really cool for all of us to breathe new life into this ever-evolving band. Plus – you like Thin Lizzy style harmonies? We do! Hope you do too!
If you only follow us on the official site, you know the news too and we’re all on the same page. But please do keep up with us on instagram, facebook and twitter (links in email signature) for all the Jake Kimberley and CC news that’s fit to print! We’ll be letting you know more about this gee-tar wunderkind as the weeks and months progress, so don’t miss out!
We are also celebrating Jake by making the entire CC store 25% off, in honor of Jake now being 25% of the CC. Just enter the coupon code JAKE at either bandcamp or bigcartel to receive 25% off any order no matter how big or small. This code will last until June 1st.
And for those of you in the Baltimore area – our first ever four piece show is tomorrow, Saturday, May 18th! It’s at The Windup Space in Baltimore. And sadly, this is one of the last shows at The Windup Space, as the legendary venue is closing its doors June 1st. All the more reason to come out! We’re rocking with Hot Shame and Infinite Pizza from Balmer, and Forest of None all the way from New Hampshire. $8, doors at 7, show at 8! Come on out! Facebook event page is HERE, so rsvp now and let us know you’ll be there!
Want more 4 piece shows after that? We got ’em!
May 24th – Columbus, OH with Matter of Planets, Unchipped and Summertime Drifters
May 25th – Rabid Fest at The Buzzbin, Canton, OH
June 1st – Oliver Brewing Company, Baltimore, MD with Lionize and Distinguished Gentlemen *only USA Lionize show all summer!*
June 28th – Atlas Brew Works, Washington, DC with Moon Tooth, TBA (not yet announced)
July 20th – Cafe 611, Frederick, MD with Pale Divine, Faith In Jane, Akris, Admiral Browning, Strange Highways and Bailjack
July 26th – The Pinch, Washington, DC with Myopic, Goosed, and Sweaty Mammoth (not yet announced)
and then…a massive summer/fall tour to be announced, including an appearance at The Blackout Cookout 10 in Youngstown, OH featuring Big Business, Inter Arma, Lo-Pan and many more! We’re working on booking the tour now!
Hope to see all you fine Charm City folks tomorrow at The Windup Space! For the rest of you, don’t forget, you can get 25% off anything and everything at the Caustic Casanova store until June 1st using coupon code JAKE at bandcamp or big cartel.
< Older Stories
Newer Stories >